Back before Who killed Homer?, John Heath wrote a somewhat contentious article for Classical World (John Heath et al., “Self-Promotion and the ‘Crisis’ In Classics [with responses],” CW 89, no. 1 (1995): 3-52) in which he argued, among other things, that the significant great divide in the profession was between those elite who work at large schools and the others who work at small. In support of the argument Heath noted differing participation rates in professional organizations, which he attributed to the ability of people at larger, more resource-rich places to volunteer for such work, knowing that their institutions would provide the needed back-up. As someone working at a small, resource-poor university, I was sympathetic to that argument, though several of the respondents to his article were not.

Being a data-based kind of guy, it seems to me that this is a testable hypothesis. If the participation rates in professional organizations present the kind of skew towards larger institutions (universities) that Heath describes, that's evidence in favor of his proposition. A recent announcement of the latest officers of the major professional organization for Classicists, the American Philological Association (one of many APAs) provides one relevant data set:

By my count, that's 12 of 13 from universities, including two from each of two places (one of which, for the record, is my doctoral alma mater in Ann Arbor), and 9 of the 10 universities have graduate programs in Classics. 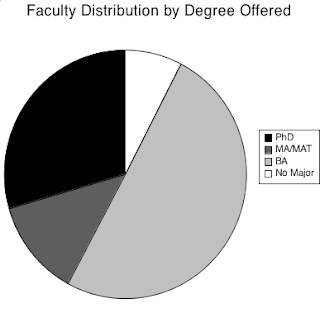 I did a count a few years ago of Classics faculty by the highest degree offered at their institution. It was based on the 2002-2003 APA departmental survey data. Here's a graphical representation. You'll see that faculty at BA-offering institutions make up half of the total, with those at institutions without even a Classics major accounting for another 8%. That total of 58% is a far cry from the 15.4% (2/13) rate seen in the election results.

Lest one think this an unusual year, holders of these same offices in 2011 were employed by BU, UMD, Georgetown U, UChicago, UCLA, Stanford U, U South Carolina, Reed College, Columbia U, Duke, UPenn,* UPenn, and Brown U, respectively. That's one college out of 13 positions, two from one university,* and again two from places without graduate programs.

Of course not all universities are the same (I teach at one, for example, though it's very much a small liberal-arts college attached to a theological school), and different faculty have different workloads, but the universities in the lists above are large and in most cases wealthy institutions. Add to that the information about graduate programs, I'd say this makes a reasonable prima facie case in support of Heath's position.

* I had to cheat a bit with one of the committee memberships because they were two members elected for 2012, but only one for 2011, so I went back a grabbed the previously elected member.
Posted by John Muccigrosso at 15:25

Email ThisBlogThis!Share to TwitterShare to FacebookShare to Pinterest
Labels: Classics